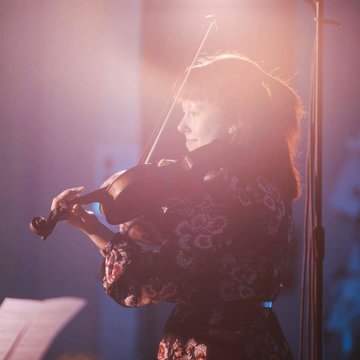 Check availability and get a free quote now - no commitment to book
From£180
Watch & Listen
About Daryl
Questions (5)
Home page
Daryl Sharpe
Like Daryl?
Watch & Listen
1-3 of 4 videos

Violinist
Chesterfield
Public liability insurance of £10 million
Daryl is a passionate and versatile violinist currently based in the Chesterfield area.

Currently based in Chesterfield. Derbyshire, Daryl has recently completed an MA in music performance at the University of York - graduating with a merit. Prior to that, she gained a 2.1 music degree from Keele University. Whilst at Keele, Daryl was awarded the Mountford scholarship which allowed her to arrange and perform in a series of lunchtime concerts. She was also given the opportunity to perform both Massenet's Meditation with Keele Philharmonic Orchestra and J.S. Bach's Double Concerto for 2 violins with Keele String Orchestra. Daryl has much orchestral experience, having performed under the baton of many notable conductors, such Peter Stark, Mark Heron, Jessica Cottis and Natalia Luis-Bassa. She has performed in many venues such as York Minster, Exeter Cathedral and Cadogan Hall. She enjoys performing in both symphonic and 'pops orchestra' type capacities. Notably, Daryl has recorded as part of the 'Piffling Philharmonic' on the award winning podcast sitcom, 'Wooden Overcoats', and has appeared on the x factor (series 14 final) accompanying Grace Davies. As a violinist, Daryl is interested in all aspects of performance and is very versatile. For her MA, she enjoyed exploring lesser known late romantic/early 21st century solo violin repertoire - including sonatas by Grazyna Bacewicz, Vagn Holmboe and Dora Pejacevic. Having had the opportunity to perform with the Chimera Ensemble at York, she has a developing interest in contemporary music, and was involved in the UK premiere of Juliana Hodkinson's 'Some Reasons for Hesitating'. She was also involved in the innovative 'Resolution of Sound' event in York, which combined new music and poetry.

I try to be flexible wherever possible. If your timings change in the run up to the event then please let me know asap and I will try to work around you - if for whatever reason the new timings don't work for me, I will help you to find a suitable replacement.

I usually arrive 30 minutes early to find out where I'm needed and to have a quick warm up.

Of course! I'm definitely happy to chat about your preferences. After all, I want your event to be special for you!

Yes - I only bring my instrument, a music stand and a folder of music.

Assuming you are not booking me last minute, I am more than happy to take specific requests wherever possible. There is no extra charge for this as it is always good to add extra repertoire into my folder anyway.