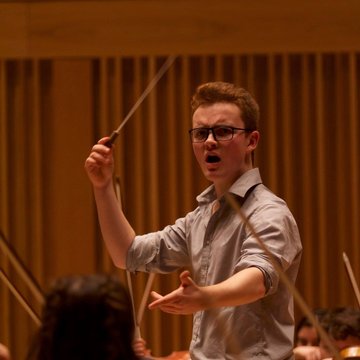 Freelance conductor, violinist and teacher, based in Somerset, London and Glasgow
Conductor
Dursley

Born in Gloucestershire, Dan received scholarships to study as a violinist under Catherine Lord at Wells in 2014, at the same time having private masterclasses from Phillip Scott. Recently the Royal Conservatoire of Scotland gave him a full tuition offer to study under the Joint Principal Study programme, studying violin and conducting with Joseph Swensen and Garry Walker. He enrolled at the Curtis Institute’s Young Artist Summer programme in Philadelphia as a conductor, where he studied under Mark Russell-Smith, Paul Bryan and Joshua Gerson, and violin under Stephen Copes, Desiree Ruhstrat and Anthea Kreston. Dan has also performed and recorded his own music for the refugees in Germany conducting the Wells Virtuosi alongside cello soloists Nigel Thean and Ian Lum. Other engagements within Wells include conducting the inaugural concert of the St. Andrew Chamber Orchestra, and live film accompaniment of Howard Blake’s The Snowman.

A true servant to music