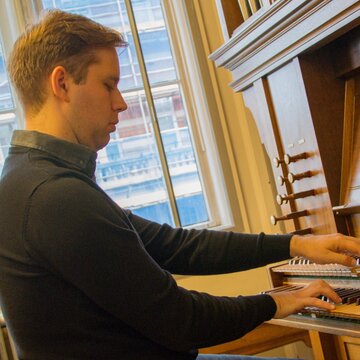 British Percussionist and organist Daniel Floyd was introduced into music from an early age being brought up in the Salvation Army playing the piano for its choir and services. After school Daniel joined the British Army and studied Percussion at the Royal Military School of Music, Kneller Hall. On completion of his studies Daniel was award “best overall musician” for his year group. After his time at Kneller Hall he was assigned to the Band of the Prince of Wales’s Division based at Tidworth Garrison. In 2013 Daniel was successful in auditioning for the Percussion and Assistant Timpani chair with the Central Band of The Royal Air Force. He was used from an early stage as a soloist in front of the Central Band performing solos on both tuned and un-tuned percussion. Having a passion for chamber music Daniel has been seen regularly at both the St Clement Danes and St John’s Waterloo lunch time concert series. Having been a military musician for 10 years he has performed at many high profile engagements all over the world often for members of the Royal Family. Daniel has worked with many musicians including; Russell Watson, Blake, Hayley Westenra, Clare Teal, Alexander Armstrong, Pixie Lott, Brett Baker, Steven Mead, Aled Jones and on many symphonic wind band recordings, including the award winning solo Trumpet CD “Fantasy” with Philip Cobb. Still enjoying the piano Daniel is a regular organist at his local church and held the role of pianist for the Royal Air Force Squadronaires, a highlight of this position was playing for the 100th birthday concert for Dame Vera Lynn. On top of his playing in the military Daniel has a real passion for orchestral percussion and has enjoyed playing with amateur orchestras all over the country. As well as being an active percussionist Daniel is in constant demand as a conductor, having already held both Principal and Assistant roles in the choral, brass band and orchestral world. Daniel was awarded a Fellowship in conducting from the London College of Music at the start of 2017. Daniel is a proud artist for Artifact Percussion.

Daniel was really easy to work with, professional and played extremely musically off not much rehearsal time. Would happily work with him again.

Very professional. Very friendly. Showed up an hour ahead of time. Contributed to the (voluntary) kids workshop. A fantastic musician & person to have around. 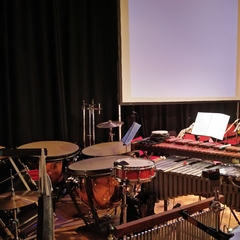 Great percussionist (and conductor), always a pleasure to share the stage with!