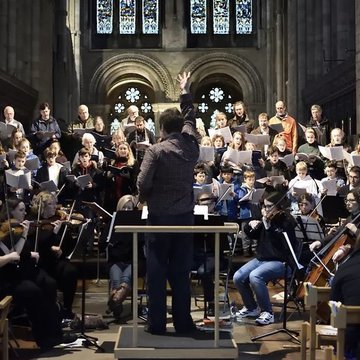 Craig Lawton is lively and enthusiastic conductor, freelance organist and percussionist working in the South of England. Firmly believing in the power a musical experience can give someone, he tirelessly bring this passion to rehearsals, concerts and projects. Working with a diverse range and size of ensembles has allowed Craig to develop a large repertoire, none-more so than the concerto and solo repertoire. Empathising with the importance and difficulty in getting solo work with ensembles, Craig seeks to give musicians an opportunity where he can. This was developed with Mary Mehuin from the Kent International Piano Courses, giving young people concerto opportunities with the Winchester Chamber Orchestra. Craig made his professional conducting debut in Europe with the Ostfold Symphony Orchestra in Norway. Continuing to enjoy podium time in France, Berlin, Bulgaria and Italy. Studying organ with Sarah Baldock at the University of Southampton, Craig has remained an active organist, appearing as organ soloist in Poulenc’s Concerto in G minor, and numerous performances of Saint-Saens’ Organ Symphony. He plays weekly services as Director of Music at Christ Church Freemantle and occasionally gives organ recitals. In conjunction with a busy conducting schedule, Craig makes time for charitable music projects, something incredibly important to him. In 2016 he was approached to spearhead the “Oncology Choir” a choir formed of staff from the University Hospital Southampton’s Oncology department to fundraise for the revolutionary new ‘Centre for Cancer Immunology’ in Southampton. This passion for fundraising through music is shared and brought to fruition with friend and colleague Paul Ingram. Between them, the dynamic duo have undertaken three epic musical marathons for Comic Relief; Haydathon (2009) and Beethovathon (2015); performing all symphonies by the two heavyweight composers and Orchestral Decathlon (2017). Craig has continued to develop his skills with Jason Lai, and most recently, in Berlin with Prof. Colin Metters (RAM). He initially studied with Dr John Traill and later at the University of Southampton with Robin Browning.

Timings for events can often change. If this happens just let me know at the earliest opportunity so I can work with it. I always aim to be flexible so things can run smoothly for you.

This is not something I would usually do. For weddings and funerals if you are using an iPod/CD for any music this must be provided by you and the tracks checked in advance.

If I'm playing in a church or crematorium that I'm not familiar with around 30mins beforehand should suffice. For timpani and percussion concerts I usually aim for 45-60mins set up time.

For weddings and funerals I have a list of appropriate works which you can choose from. However, I am always happy to discuss what you are looking for to ensure the atmosphere and sentiment for your event is fulfilled.

For weddings and funerals in churches I would usually use the in house instruments. For timpani I have access to and can transport 3 hand tuned and 2 pedal instruments

If there is a piece which is not in my repertoire that is of importance to you there is a chance I will know it and be able to perform. If a piece needs to be specially arranged for the organ or piano there is a fee of £35 to take in additional preparation and rehearsal time

Talking about what I'm doing! When conducting or giving recitals I like to talk and introduce the works we are performing and let them know what the journey to the concert has been like. This helps breaks down barriers and shows a different side to the job.

I have performed in many of the churches in Southampton in addition to the Turner Sims, O2 Guildhall, Thornden Hall. Nationally I have performed in the Colston Hall, Bristol; Queen Elizabeth Hall; Royal Albert Hall, Merton Abbey Mills, London

So many of the great conductors; Klemperer, Bernstein, Tennstedt