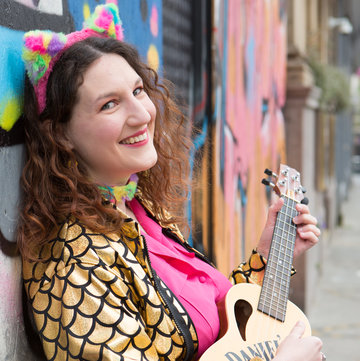 Singer-songwriter. I play the ukulele & keyboard and write my own songs.

I've been doing gigs and busking for the past 9 years. I love making people smile with my music and helping people to have a good time whatever the occasion.

I had the pleasure of working alongside Kathy for a recent album project and the whole experience was a delight from start to finish. Rather than waxing lyrical about her vocal delivery, I thought it might be more helpful and less biased to include a short selection of what other people have to say... ‘Kathy’s vocal draws similarities to the delivery style of Eddi Reader (Fairground Attraction), although the sound itself hints of Sonya Madan (Echobelly), another vocalist with a cheery disposition who toggled between emotive lines with natural ease. Giddins draws from both elements to create her own unique style, leaving this first impression an incredibly memorable one’. Martin Noakes (The Great Dark Wonder) ‘It simply doesn’t get any better than that’ Dean Jackson (BBC introducing) 'Her voice tells you what life is like as you stroll around in a constant daze in this crazy world. The tender nature of her fine vocals make your ears wake up and turning up the volume is an automatic reaction’. Llewelyn Screen (A&R Factory) Featured tracks from the album received rotational airplay across the East Midlands region on the BBC Local Radio and the song ‘Wallflower’ is selected for inclusion on the next FATEA Magazine showcase sessions ‘Halcyon’ Summer 21. Whatever the future holds for Kathy I wish her well and needless to say she comes highly recommended.

Opening the Old Firehouse’s bolthole stage last Sunday was Kathy Giddins. Bringing just a ukulele and her confidently soaring voice onto stage, she had the respectable-sized crowd captivated in no time. Her massive vocal range took us through her own songs, covers and parodies, including One Direction’s ‘Perfect’ in which she changed the word “perfect” to “a lesbian”, ensuing in quite a few cheers from the crowd. Sixpence None The Richer’s ‘Kiss Me’ was a flawless fit to Kathy’s lilting voice, as was Ed Sheeran’s ‘Thinking Out Loud’. Her set was at least 45 minutes, and interspersed with her own songs including ‘The Trouble With You’ and ‘The Cat’ (including meows, which I particularly loved because meows are how I usually sing along to songs). ‘The Paris Metro Song’ draws on her time spent working in the French capital and was the stand out song, using the uke to create percussion sounds alluding to the sound of the underground. I watched as a couple came in the door, peered round the doorframe to the stage on the left, and mouthed “wow” to each other. Kathy’s upward inflections and strong ukulele strumming makes her distinctive on stage and I’m sure the crowd won’t be forgetting her in a hurry. The closest comparison I can think of is Gabrielle Aplin, but that doesn’t do Giddins’ voice and vocal range justice. As my boyfriend said, “She’s really good.” (This is high praise for two reasons: he’s really picky about music, and he’s a local so isn’t the biggest fan of students.) Live music is so enjoyable when the audience can tell that the artist on stage is legitimately enjoying themselves; Kathy was smiling through the words and bobbing around, confidently picking on the strings. She was the perfect start to a Sunday night.