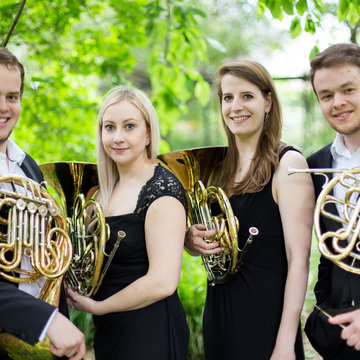 Formed in 2015, the Cornicen Horn Quartet consists of four, final-year Masters students at the Royal Academy of Music. Prior to joining RAM, we studied a diverse range of undergraduate degrees, from Horn at Trinity Laban conservatoire and the Royal Northern College of Music, to Music at St Catharine’ College, Cambridge, and Piano at RAM. Having all been recipients of generous scholarships and bursaries at RAM, the quartet have been honing their skills as soloists, orchestral and ensemble players, with the help of their teachers, Michael Thompson, Richard Watkins, Martin Owen, Katy Woolley and Roger Montgomery. Our collective professional experience includes performing with London Sinfonietta, Royal Scottish National Orchestra, Hallé Orchestra and Northern Ballet as well as working alongside the BBC National Orchestra of Wales, BBC Philharmonic Orchestra, the Philharmonia and session work with Warner music LTD. Between us, we have been prize winners and finalists of various competitions across the country and have performed at venues including the Royal Festival Hall, The Royal Albert Hall and the Royal Opera House. We have travelled throughout Europe participating on tours to destinations including Denmark, Holland, Italy, Germany, Finland and Poland as well as outside of Europe as far as Hong Kong and China. With a wide variety of repertoire including works by Paul Hindemith, Mozart, Rossini, and many of our own arrangements, the quartet have performs in concerts, private and corporate functions, and other events. As a quartet, we are keen to perform to education institutes and communities, with workshops and masterclasses throughout the country.