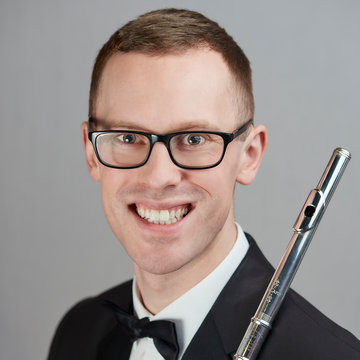 Christopher was born and raised in Ipswich, Suffolk. Having started the flute rather late at the age of 16, achieving Grade 8 Distinction at 17, he went on to study at the Royal Welsh College of Music & Drama and the Royal Academy of Music. During his time at RWCMD, Christopher studied with Sarah Newbold, Jonathan Burgess, Eva Stewart and Andrew Lane. As part of the Orchestral Performance course, Christopher enjoyed professional placement schemes with both Welsh National Opera and BBC National Orchestra of Wales. He was also fortunate to be a part of many projects at RWCMD, including Prokofiev's Peter and the Wolf, Beethoven's Symphony No. 9 with Carlo Rizzi and Britten's Albert Herring, for which the South Wales Argus reviewed “Equally worthy of praise was the playing of the Royal Welsh College Soloists conducted by David Jones … and Christopher Green (flute) deserve[s] a special bow." He has just completed his postgraduate studies at the Royal Academy of Music, where he specialised as a principal-study piccolo player, studying with Pat Morris, Helen Keen and Karen Jones. Christopher has freelanced with such orchestras as BBC Concert Orchestra, Welsh National Opera, National Symphony Orchestra and BBC National Orchestra of Wales, as well as holding the Principal Flute seat for the Thursford Christmas Spectacular show. As a soloist, Christopher has performed both Mozart Flute Concerti around England and Wales as well as Chaminade’s Concertino with Newport Philharmonic. He was also a finalist in the RWCMD Frank Kelleher Prize, semi-finalist in the RWCMD Concerto Competition with the Nielsen (2014) and Ibert (2015) concerti, and was awarded 2nd prize in the Instrumental Solo Competition in the 2016 Abergavenny Eisteddfod. Alongside his work as a musician, Christopher holds a prestigious instrumental teaching post at an independent school in Kent and previously taught at the Junior Conservatoire for the Royal Welsh College of Music & Drama. Christopher was also recently an adjudicator for the South West Universities Concert Band Festival 2022. Christopher is extremely grateful to his teachers and the charities that have supported him throughout his musical education: •Arts Council of Wales •Cardiff Community Endowment Fund •EMI Sound Foundation •Help Musicians UK Postgraduate Award •The Kathleen Trust •Macfarlane Walker Trust •Roger David Burrows Music Fund •Sir John Barbirolli Memorial Foundation •Split Infinitive Trust

I'm completely self-employed and as such, I try to be as flexible as possible.

SW
South A
7 years ago

SW
South A
7 years ago