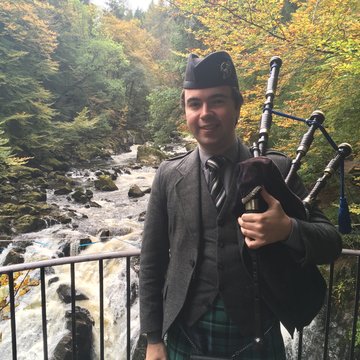 Chris Gray is a multi-instrumentalist and composer who plays piano, highland & border pipes and whistles based in Glasgow.
3 of 6 photos
Bagpiper
Glasgow
Verified profile

Chris Gray is from Lockerbie, Scotland and is a multi-instrumentalist and composer who plays piano, highland & border pipes and whistles. He recently graduated with a First-Class Honours BMus Degree in Traditional Music from the Royal Conservatoire of Scotland. Chris is now continuing his studies on the Masters’ in Traditional Music programme with piano as his main study. Although only in his early twenties, Chris’s versatility as a musician has seen him involved in a variety of projects and performances. Chris is active as a performer having recently played at the Edinburgh Fringe Festival 2017 accompanying Scots & Gaelic singer Katie Macfarlane. He has been a part of many performances at Celtic Connections as well as playing and teaching with various projects internationally in France, Germany, Italy, Switzerland, Slovakia and Oman. Chris is also a member of the Inveraray & District Pipe Band and with them has won the 2017 World Pipe Band Championships as well as the Scottish, British & European Championships. Chris’ innovative approach to his piano arrangements has led to him to being involved in many collaborations and performances. Recent highlights include performing solo piano at Blair Castle for Keepers of the Quaich banquets, the Edinburgh Fringe Festival and as part of the backing band with the National Youth Pipe Band of Scotland and Inveraray & District Pipe Band. On piano Chris has performed alongside many artists including Katie Macfarlane, Josie Duncan, Mischa Macpherson, Graham Mackenzie, Duncan Lyall and Calum MacCrimmon. As a composer Chris enjoys taking influence from a range of genres including folk, classical and jazz. His compositional work includes folk tune-writing, arrangements for ensembles and improvised pieces. In January 2017 Chris released a video of his arrangement of the piobaireachd ‘MacKintosh’s Lament’ (Cumha Mhic an Toisich) for piano, strings and vocals featuring award winning Gaelic singer Mischa Macpherson. Piping highlights include winning the World Pipe Band Championships with Inveraray & District Pipe Band in 2017 as well as having pre-recorded for BBC Radio Scotland’s St Andrews’s night broadcast alongside Phil Cunningham, Aly Bain, Jenn Butterworth and the Royal Conservatoire of Scotland’s Traditional Music and Brass departments. In 2013 Chris performed at ‘Ascension’ (Inveraray & District’s pre-worlds concert that sold out the Glasgow Royal Concert Hall) and at the 2012 NA Trad Awards (with IDPB), and also recorded with the band for the BBC Hogmanay broadcast. In 2014 and 2015 Chris was part of the winning Inveraray & District quartet at the Piping Live Festival’s International Quartet competition. For four years Chris was also a member of the National Youth Pipe Band of Scotland and with them played at venues including the Usher Hall in Edinburgh, the Glasgow Royal Concert Hall (Celtic Connections Festival), the SECC, the Hallenstadion, Zurich and St Paul’s Cathedral in London. Through the NYPBoS Chris participated in outreach events which involved instructing and encouraging youngsters from various regions of Scotland as well as having the privilege of performing for royalty. Now based in Glasgow, Chris is heavily in demand as a freelance musician having performed with bands including Barluath, Heron Valley, Whisky Kiss, the theatre/ceilidh production ‘This is Ceilidh’ at the Edinburgh Fringe as well as guesting with several ceilidh bands.

Chris was exactly what we needed. He is unassuming and just does what he needs to do. No fuss no ego. If you need a talented and local musician please think of him

'Thank you very much for piping for us at our wedding. Everyone remarked on how great you were.'

'Thank you for the wonderful piping. It made the gigs great.'