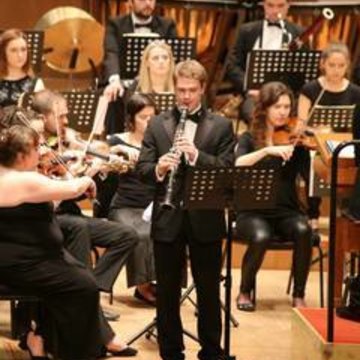 Chris Goodman grew up in Bangor, North Wales, where he began playing Clarinet aged 9. After leaving North Wales he studied as a foundation scholar at Royal College of Music with Timothy Lines, Barnaby Robson and Richard Hosford and Bass Clarinet with Paul Richards and Michael Harris, graduating in 2010. He was awarded the Steven Trier Prize for Bass Clarinet and in 2009 joined the English National Opera Emerge scheme for Bluebeards Castle, Rite of Spring and Tosca. He was selected as an RCM Rising Star for the Cadogan Hall series and upon graduation was selected to attend the Castleton Festival where he performed in the Festival & Opera Orchestras as Principal Clarinet and on Eb and Bass Clarinet under the baton of the late Lorin Maazel. As part of the BBC Proms ‘Composer Portraits’ Series he performed live on BBC Radio 3 in the European Premiere of Chamber music by award winning composer Augusta Read Thomas. Chamber music has been a significant part of Chris' career, having performed with the Goodman Quartet for 4 years on the Live Music Now scheme and directing his own concert series under the banner of 'Earlsfield Ensemble', giving regular concerts in the Wandsworth area for the Wandsworth society and Wandsworth Arts Festival for larger mixed chamber groups. The Gelachter Trio won the Emerson Prize in the RCM wind ensemble competition and were semi finalists in the Royal overses league competition. They have given masterclasses and workshops at Leeds College of Music, Roedean school and recitals at St Martin in the Fields as well as music clubs around the UK. As a soloist, Chris has performed Mozart Concerto with London Arte Chamber Orchestra and Fabricio Brachetta (2019) Louis Spohr concerto no1 with Angel Orchestra (2018) Mozart Clarinet Concerto with Orchestra of Situation Opera under the direction of Daniel Capps (2008) and Clarinet Concerto No 2 by Louis Spohr with London Chamber Academy Orchestra (2009). In December 2014 he toured China with London Arte Chamber Orchestra and as concerto soloist in the third movement of Weber's 2nd Clarinet Concerto, finishing up at the concert hall of Shanghai's Oriental Arts Centre. As an orchestral player Chris has performed with a number of ensembles including English touring opera, Brighton Philharmonic, London Concert Orchestra, Southern Sinfonia, Milton Keynes City Orchestra, Arensky Chamber Orchestra, Faust chamber orchestra, Orpheus Sinfonia and is currently on trial with Bournemouth Symphony Orchestra for 2nd and Bass and Welsh National Opera for Sub Principal Clarinet.

Standard Prices
All prices include:Minimum performance fee is £120 for up to 30 minutes playing 1 hour - lunchtime recital / background music (no interval / break) 2 hours - full evening recital or background music (one 20 min break) 3 hours - background music (two 20 minute breaks) Please note that prices do not factor in the cost of my accompanist, the extra cost for which really depends on the repertoire involved, the type of event (formal recital / background music / wedding etc) and, crucially, whether there is a piano available. My fees for conducting are a fixed rate of £45 per hour and the minimum booking is two hours. For a standard 3 hour rehearsal however I can offer a slightly reduced all inclusive rate of £120. The above is of course negotiable if booking for a week long course / youth orchestras etc.
Chris

Very good indeed. He was engaged to take a woodwind sectional rehearsal which he did with great skill, imparting some very helpful and novel tips to the already reasonably experienced players. I hope we can work with him again. 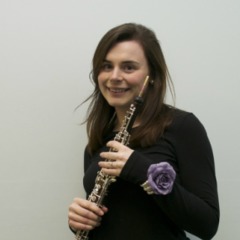 Having performed with Chris for over 6 years now I can say he is a great guy to work with! Amazing player and also super fun in and outside of rehearsals.