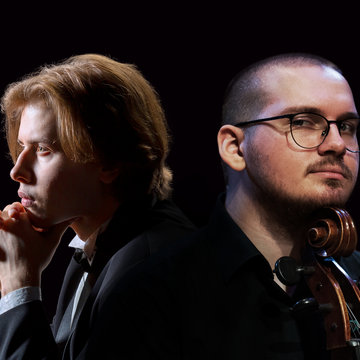 About Cello and Piano Duo

Professional experienced cello and piano duo. Our wide repertoire can be tailored specifically for any event without limitations.

Hello, we are professional musicians with over 15 years of experience in our instruments. Winners of multiple competitions, with international recognition and hundreds of concerts and events behind our backs. We're looking to deliver nothing but the best musical experience for our audiences, and we will be delighted to offer our services to you. Our performances took place in UK's most prestigious halls, such as Wigmore Hall, Royal Albert Hall, Kings Place, among others. To learn more about us, please find our individual biographies below. Cello Born in 2000, Egor Semenov is a descendant of the Russian Cello school, studying in Nizhniy Novgorod and Moscow. From the age of 6, Egor has been performing with chamber and philharmonic orchestras in Russia's best halls. Throughout the early years in Russia Egor has won more than 20 local, as well as international and countrywide competitions, culminating in a Grand-Prix in “New Heights” – an international all-instrument competition. In light of immense success in Russia, Egor was invited to study in The Purcell School, a specialist music school in London, receiving full fee and boarding scholarship. Here he was taught by Natalia Pavlutskaya (a close friend of Mstislav Rostropovich and Alfred Schnittke). Throughout the Purcell years Egor has performed in the best halls of London, as well as other UK cities. Most notable halls include Royal Festival Hall, Cadogan Hall, Queen Elizabeth Hall, St Martin-in-the-fields, and Wigmore Hall. After Purcell, Egor received a substantial scholarship to study in Royal Birmingham Conservatoire. Egor is a long standing member of the YMSO, performing on a regular basis the heart of Westminster – St John’s Smith Square. . Egor is proud to be one of the musicians at the Talent Unlimited scheme in London. Piano Pianist Nikita Lukinov performed at Wigmore Hall, Kings Place, Barbican. His most recent award is a Grand Prix of the international piano competition “Tokyo Stars 2021” that took place in Japan. Nikita has started his musical education in Voronezh, Russia. Nikita’s first significant success was a Grand-Prix at the 2010 International Shostakovich Piano Competition in Moscow. This led to a debut with a symphonic orchestra was at the age of 11. After studying in Russia Nikita won a full scholarship to continue his education at The Purcell School in London. In 2017 and 2021 Nikita won full scholarships to pursue his Bachelor and Master degrees at the Royal Conservatoire of Scotland. Other Nikita’s recent awards include: 2nd place at the Franz Liszt Center International Piano Competition, Spain 2021; Grand-Prix at the online competition “Music and Stars Award”, UK 2021; In 2020 Nikita Lukinov was appointed as “Emissary of the Muses” of San Antonio, State of Texas.

We offer both solo and duo cello and piano with a wide variety of reperotire.

To set up we need around 40 minutes - tuning and warming up included.

Absolutely. We encourage our clients to tell us if there are any particular requests they would enjoy, and will try to accommodate every wish.

Standard Prices
2 musicians
All prices include:Preliminary discussion on the nature of the performance, pricing, repertoire and such.

Fantastic Duo, very professional and beautiful sound! Please come to our events again, would love to hear more of you!