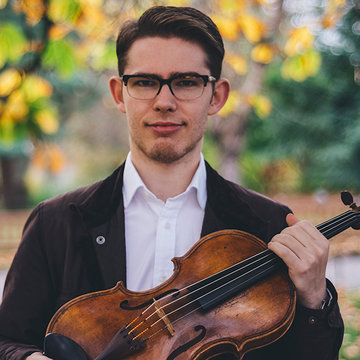 Check availability and get a free quote now - no commitment to book
From£180
Watch & Listen
About Campbell
Home page
Campbell Parker
Like Campbell?
Watch & Listen
Watch
Listen
1-3 of 8 videos

Violist
Glasgow
Campbell Parker is a Violist and graduate of the Royal Conservatoire of Scotland.

Campbell Parker first began his musical studies on the violin. At age 16 and under the tutelage of Gerry Doherty, Campbell changed to the viola. Campbell is a graduate of the Royal Conservatoire of Scotland having obtained a Bachelor degree with honors in music performance, where he studied with professor Stephen Tees and with professor Duncan Ferguson. Campbell was involved with many different ensembles at the Royal Conservatoire Of Scotland notable; the 'RCS String Orchestra' in which he was principle and premiered a new work by award winning composer ‘Jay Capperauld’ and participating in a chamber version of Britten's opera 'Owen Wingrave' under the baton of Tim Dean which received 4 star reviews from the 'Herald' and 'Bachtrack'. In 2015/16 Campbell was accepted onto the BBC Scottish Symphony Orchestra apprenticeship scheme where he performed alongside the BBC SSO for a collaborative concert involving a number of new compositions from composers from the RCS, this was broadcast live online for the BBC as part of the 'Shakespeare on Tour' project. Campbell has also been involved with many Scottish musical ensembles including; Magnetic Opera and The Scokendia Ensemble (which was involved extensively in the Glasgow Commonwealth Games 2014) . He was also invited to a series of conferences and talks and events organised by the 'European Federation of National Youth Orchestras' which took place in the city of Glasgow in 2015, where he represented Scotland. Outside of Scotland he was invited to join 'The International Music Festival Palendriai 2015-2016' in Lithuania, in which he has premiered and recorded numerous new works for chamber ensemble and accordion and worked closely and intensely with a number of composers from around the world. Campbell was also invited to Dresden Germany in 2016, to participate in a production of 'La Bohéme' with production company 'Szene 12'. In 2017 Campbell was invited to tour with soloist Martynas Levickis and string quartet culminating with 15 performances all over Lithuania. In 2015 Campbell studied abroad in the Netherlands, studying at the Utrecht Conservatorium under Professor Richard Wolfe. During his time at the Utrecht Conservatorium Campbell had the opportunity to work under the baton of the Great Russian conductor ‘Lev Markiz’; form a new ensemble ‘The Traiectum Ensemble’ which performed extensively around the Netherlands and become heavily involved in the large Early Music department at the Conservatorium. During the summer of 2015 he was also invited to join the Netherlands Jeugd Okest (NJO), where he participated in chamber music projects with violin soloist 'Joe Puglia' and took part in larger orchestral projects, both filmed and televised on Dutch television. Campbell is founding member of the 'The Dohnányi String Trio' which was invited to play in the Aberdeen Youth Music Festival in 2016 and work closely with members of the 'Hebrides Ensemble'. 'The Dohnányi String Trio' are also members of the also 'Live Music Now Scotland' scheme and have been performing all around Scotland, notably in the National portrait Gallery, The National Museum of Scotland and the Usher Hall. Campbell has performed in Masterclasses with Steve Tees, Duncan Ferguson, Simon Roland-Jones, Sebastian Koloski, Katherine Routley, Joe Puglia, Will Conway and members of the 'The Brodksy Quartet'. Campbell plays on a 2013 ‘Marion Bennardo’ Viola