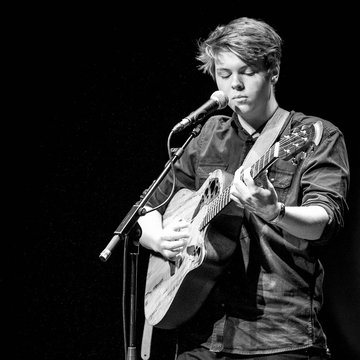 A refreshing young singer-songwriter from Oran, Moray. Creating original material with influences from Folk, Country, Blues, Traditional and Celtic Rock. 2017 got off to a great start for this young musician, with his debut single “Your Man” being showcased by Jo Whiley on BBC Radio 2, swiftly followed by a successful debut album "Wasted Days" and his Charity single "The La La La Song" raising over £1500. He also hit the Festival circuit running, performing at numerous Scottish festivals including Eden, Belladrum, Speyfest, Northern Roots, XPO North, Jocktoberfest & Killin (where he won the competition to open next years festival and perform on the Danny Kyle stage at Celtic Connections) Other highlights include performing for YPI at Perth Concert Hall, Music For Youth at SWG3 Glasgow, Princess Anne at the opening of the Castle to Cathedral Project and supporting Brownbear in Elgin. With performances at Edinburgh Castle, The Royal College of Music in Manchester & Eden Court, Inverness among numerous gigs already confirmed for later this year things can only get better. BIO: Calum began writing original material and performing it at his local open mic night at 13. Originally focusing on drums, he has developed into a talented multi-instrumentalist and actually plays all of the instruments (except fiddle) on his recently recorded tracks. He's had many great experiences but the highlight of his musical journey so far is singing 500 miles, to an audience of more than 5000 people, at The Royal Albert Hall in London.