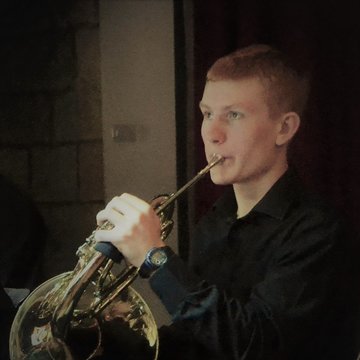 Check availability and get a free quote now - no commitment to book
From£160
About Caleb
Song list
Reviews
Home page
Caleb Kernaghan
Like Caleb?

I recently had the pleasure of working with Caleb during the University of Bristol production of ‘George and The Dragon; The Pantomime’. As musical director, I was responsible for assembling musicians for the pit band in addition to arranging music for the show. As soon as I advertised for a horn player, Caleb contacted me immediately with great enthusiasm to join the musical ensemble. From the first rehearsal, Caleb was always punctual and extremely reliable. I was aware of his already busy schedule, however Caleb was organised and informed me in well advance of this. During the performance week, there were a few unexpected alterations in the musical repertoire of the show, and subsequently I had to provide new sheet music for the band with only a few hours before the opening night. Caleb was punctual to the unexpected rehearsals and never complained about the additional hours than originally agreed. Caleb is an excellent sight-reader and a brilliant musician. His professional attitude was admirable and I would have no hesitation with working with him in the future.

Booked for a private drinks reception at the SS Great Britain. They were quick to respond to queries and flexible on repertoire. Great feedback from guests and staff alike, very happy to have booked The Speranza Quintet!

Caleb is very committed to his French Horn playing. He has made fantastic progress with his ensemble skills this year due to all his playing at high levels in various groups.