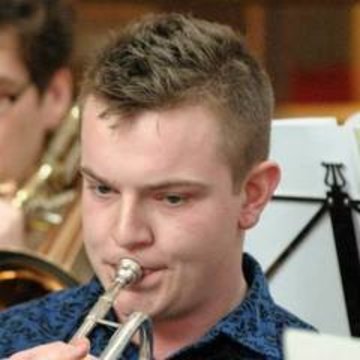 Brendan is a reliable and versatile musician based in London, working in a variety of genres from classical music through to pop and jazz.

Brendan is an experienced and well qualified freelance musician based in South East London. As well as being a versatile performer, he is an enthusiastic teacher of trumpet and piano, and is also a licensed Ski instructor! Brendan's passion for music began at the age of three when his dad taught him Scottish fiddle tunes on an Early Learning Centre plastic trumpet and then piano. After completing primary school in West Calder he spent 6 years at St Mary’s Music School in Edinburgh. While at school he won numerous first prizes in the Edinburgh competition Festival on piano, trumpet and in composition. He also won the under 16 class in the Moray Piano Competition and, on piano, the Rotary Club Young Musician of The Year (district 1020). He played in a number of orchestras and bands including the National Youth Jazz Orchestra of Scotland and the Tommy Smith Youth Jazz Orchestra. In 2009 he moved to Cambridge to study music and was awarded a chamber music scholarship in piano. He played regularly in a range of chamber music groups and earned extra pocket money accompanying other students for performances and exams. Whilst at Cambridge he played trumpet in the university chamber orchestra and symphony orchestra, the Churchill Jazz Band and the university jazz band as well as a range of other orchestras and bands and the Baroque group Collegium Musicum. He played as soloist in the Hummel trumpet concerto with the Sinfonia of Cambridge and the Haydn trumpet concerto with the Selwyn college orchestra. In September 2012 he moved to London to study trumpet performance at the Royal College of Music and graduated with distinction in the summer of 2014. Since coming to London, Brendan has continued to work as an accompanist and has developed his interest in a range of trumpet styles. He has performed on a number of occasions with the Dunedin Consort, a world class Baroque ensemble. Over the past few years Brendan has played regularly in their annual festive season Messiah series and has also played with them in Bach’s B minor mass and on the consort’s acclaimed recording of Bach’s Christmas Cantata and Magnificat. He has continued to develop his orchestral playing – this has included spells playing for the St Petersburg Ballet, the Malta Philharmonic Orchestra , the London Musical Arts Orchestra and the Multi-Story Orchestra. He has also played repeatedly with a number of notable bands including The Congo Faith Healers, the London Function Band, Slixonic, Blue Lion Band and Brassroots. He is a member of funk band Ma’Grass and in 2016 has performed as part of Viva Productions’ tour of “The Hitmaker”, a tribute to Nile Rodgers.

I will always try to be as flexible as possible, and if you give me enough notice it should be possible to adjust timings. The best option is usually to book a large enough time window to allow flexibility within this time, as needing to arrive earlier or leave later could cause scheduling problems or incur additional charges.

Unfortunately, this isn't a service I provide personally, but I can help you to someone or find an alternative solution.

I need very little time to set up - 15 minutes if it's playing acoustically, or 30 minutes if there are microphones/PA etc.

I am always happy to discuss what I will perform with you, so that we can work out what will work best for your event.

Yes, I can always bring my own instrument, music stand and other related accessories.

I can take specific requests before the event, however if it's something that isn't in my repertoire, there may be a small charge (around £30 per new piece) to cover the time of transcribing and learning the new song.

I am flexible and always tailor my performances to a client's individual needs. I put a lot into the preparation and the performance, and I like to bring something new and special even when playing well known pieces.

I have played in venues of all sizes and types, from the Royal Albert Hall to Pizza Express and from churches to back gardens in Sussex!

Growing up, I had an obsession withe heavy metal band Korn, and their rhythmic energy and brilliant structuring of songs has always fascinated me! I also love Nickel Creek, for their sheer emotional power and the virtuosity in the playing and singing.

Recently I was playing as part of the Multi-Story Orchestra at the BBC Proms, with Public Service Broadcasting.

Standard Prices
All prices include:Unlimited email contact and phone calls to ensure you get what you need for your event.
Brendan

PK
Peter K
3 years ago, for a Concert in Woodland Rd

I engaged Brendan Musk to play as a natural trumpet player for a run of Messiah performances I was giving. He is a highly gifted and intelligent musician with a beautiful lyrical sound. Furthermore, his professionalism is first-rate: he arrived immaculately prepared and was very enjoyable to work with in rehearsal.

CP
Christopher P
3 years ago, for a Concert in The University Church

Brendan is a fantastic trumpeter both on modern and period instruments. He plays with great style and musicality and is a great team player in orchestral situations and in more chamber music settings. I have particularly booked Brendan to play 1st Trumpet in a number of performances and will continue to do so. He is a committed professional, friendly, supportive and an all round excellent musician to have involved in projects.