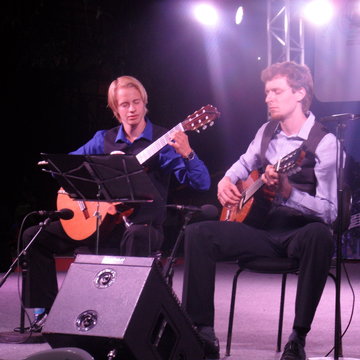 Jonatan first met the Berlin based guitarist and composer Björn Bergek during the summer of 2011 at Ingesund College of Music in Arvika, Sweden. Later that year they formed the group Bougt & Bergek Duo. They started off playing Brazilian style Choro, and in 2012 created a complete programme with Swedish Folklore Music arranged for two guitars that they used in their recitals in Brazil the same year. They also had the pleasure of presenting their arrangements and compositions live on TV-Gazeta and other tv-stations during their stay in Brazil. They have since had various recitals in Scandinavia and in 2014 they went on tour, performing a mixture of Swedish and Brazilian music in Sweden and Finland.