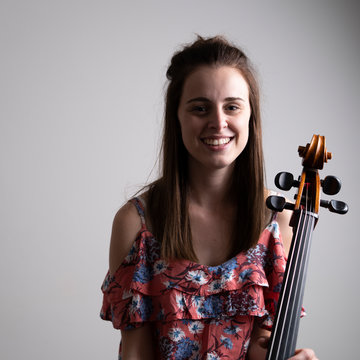 Check availability and get a free quote now - no commitment to book
From£180
Watch & Listen
About Bethany
Reviews
Home page
Bethany Nicholson
Like Bethany?
Watch & Listen
Watch
Listen
1-3 of 5 videos

3 of 5 photos
Cellist
Doncaster
Public liability insurance of £10 million
Cellist available for weddings, sessions, and events across the UK

Bethany is a Cellist based in Yorkshire who specialising in many genres including classical, musical theatre, folk and contemporary. She is a performer, collaborator and session musician, she has worked internationally and all over the UK. As a session Cellist, Bethany has performed and recorded with artists such as The Bootleg Beatles, Crooked Weather, Pavey Ark, and The Broken Orchestra. Bethany has made several radio appearances, including BBC Radio 3, BBC Introducing Humberside and Cambridge and Classic FM. Bethany has performed at a number of festivals such as Cambridge Folk Festival, London and Hull Jazz Festival, Cornbury Festival, Humber Street Sesh, Freedom Festival, BBC Contains Strong Language, Summer of Love Festival and Made in Hull Mini Cruise. Bethany has performed theatrical shows, including Hello Again at the Union Theatre (MD Henry Brennan), Chiswick and Wight Proms at Chiswick House and The Isle of Wight, Turn and Face the Strange at Hull Truck, The Sound of Music Cyprus tour at Strovolos Municipal and Limassol Pattihio Theatre (MD Brady Mould), Orpheus in the underworld at the University of Leeds Riley Smith Theatre, Silver White Winters at the Majestic Theatre Retford, Chinese Whispers Project at Tianjin Normal University in China and Sweet Charity at Middleton Hall Hull. Bethany is principal cellist for the NMTO play throughs. Bethany studied at the University of Hull with Brice Catherin and holds a Bachelor of Music and Masters of Music distinction in cello performance. Bethany has been involved in masterclasses and workshops with several international artists including Fenella Humphreys, Johnathan Bloxham, Berkley Ensemble and the Carducci Quartet.

I have known Bethany Nicholson for the duration of her three years as an undergraduate student at the University of Hull. This has included teaching her on the third-year module ‘Advanced Performance’ in addition to supervising her excellent Individual Project on the music and notational practices of Morton Feldman. I have also performed with her in locations such as the Ferens Art Gallery and Tianjin Normal University, China. Bethany has contributed extensively to university ensembles and maintains a cheerful rapport with her fellow musicians. She is also proactive in securing performance engagements outside of the university. Bethany comes with my warm recommendation.

I am pleased to write a reference for Beth Nicholson. She is a gifted musician, a highly intelligent person and an engaging personality. She is a sensitive and imaginative performer (‘cellist), capable of expressive and deliberate playing in styles ranging from early seventeenth century to the present day. She is both an expert baroque ‘cellist and fine executant of post-modern idioms, without compromise or bland accomplishment in varying styles in between. Beth is not only a fine performer, she is also completely reliable in ensemble work and in motivating others to achieve high standards. Performative projects to which she is committed receive her undivided attention. She takes the trouble to research an activity or programme and if necessary organize the musicians involved.