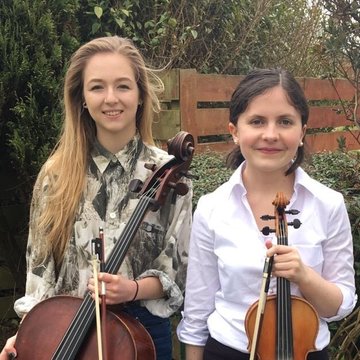 Formed in April 2018 the Belleisle Duo consists of violinist Emma Baird and cellist Laura Williamson Emma Baird studies violin with Andrea Gajic at RCS Junior Conservatoire and St Mary's Music School. She plays in several chamber ensembles, leads both symphony orchestras and enjoys giving regular solo and group performances across the UK, most recently at the RNCM Chamber Music Festival in Manchester. Emma has won numerous prizes at the Edinburgh, Glasgow and Ayrshire Music Festivals, most notably the 2017 Ailie Cullen award for 'the most outstanding performance of the Glasgow Music Festival' and the 2018 Edinburgh Festival concerto competition. At RCS she was three time winner of the Nan Christie Prize for Strings and also won the 2016 concerto competition. Emma has appeared as soloist with the RCS Juniors Symphony Orchestra, String Ensemble, South Ayrshire Chamber Orchestra and Edinburgh Competition Festival Orchestra among others. She has received master classes from Natasha Boyarsky, Nicola Benedetti, Alina Ibragimova and Nigel Osborne and has toured with NYOS and NYOGB. In September she will begin studies at the Royal Academy of Music as a scholar. Born in Prestwick, Scotland, Laura Williamson began her musical career aged 8 when she was given a cello by her local primary school. She attended the RCS junior department for seven years then spent two years at Chetham’s School of Music. Laura has performed with many orchestra’s including The West of Scotland School’s Symphony Orchestra, both in the section and as a soloist, The Orion Orchestra and The National Youth Orchestra of Great Britten, under the baton of conductors such as Sir Mark Elder and John Wilson. Her proudest musical achievements to date are Winning the Ailie Cullen Memorial Prize at the Glasgow Music festival and directing and arranging music for Prestwick Academy’s cello ensemble. She has also started exploring viol playing to broaden her musical awareness. Now she is a RCM scholar student at the Royal College of Music in London, studying with Raphael Wallfisch. In the future she aspires to work in a professional orchestra.