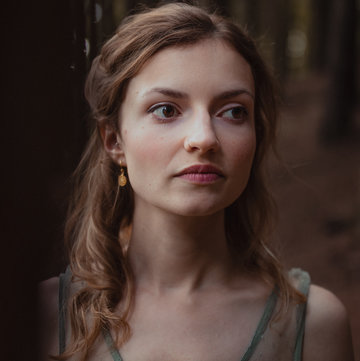 Becki is a professional harpist, graduating in 2018 with a Masters degree from The Royal Northern College of Music, under the tuition of Eira Lynn Jones. A passionate performer, Becki has performed in venues such as the Hong Kong Cultural Centre as a 2017 World Harp Congress soloist, The Wigmore Hall (London), The Bridgewater Hall (Manchester) and The Sage, Gateshead. After discovering a love of chamber music in her undergraduate degree, Becki continued to develop this during her Masters, founding Duo Azure (Harp and Violin) and the award winning Chroma Harp duo. Chroma harp are currently performing as part of the prestigious Live Music Now Scheme, founded by Yehudi Menuhin to bring the highest standards of musicianship to those in the community who have least opportunity to experience the joy and benefits of being involved in live performance. Whilst studying for her Masters Becki has been exploring the use of the harp within experimental electronic projects. Becki loves to discover and perform new contemporary music, and regularly works alongside composers to develop and expand the harp repertoire. In 2017 she performed in the Wigmore Hall as part of their Tansy Davies composer series, and performs regularly with contemporary orchestras. As part of the Chroma Harp Duo Becki gave the European premiere of Paul Patterson’s harp duet, 'Scorpions', a piece for which the duo was awarded first prize in the ensemble class at the Camac Harp Competition in London and the UKHA prize for the best performance of a work by a British composer. Becki went on to work alongside Paul, and showcased his harp solo ‘Lizards’ as part of the 13th World Harp Congress in Hong Kong (2017). Most recently, she has worked alongside composer John Kefala Kerr to create a performance space within Newcastle's Grainger markets. The project, 'Acadia' celebrated the history and contemporary life of the markets, culminating in several performances of the work, written for harp, soprano and electronics.

I never book more than one event on a day, so if your timings change that's okay! Just keep me in the loop, and I'll make sure to be exactly where you need me, set up and ready, no stress!

I usually like to arrive pretty early, so that all the harp covers are removed and moved out of sight. That way, when everyone starts arriving they immediately get the wow factor of the harp within your beautiful venue.

Yes, everything is included in this to keep it simple for you!

None at all - my instrument is played acoustically so I don't need any equipment. If it is raining then I will need full cover or to perform indoors as my instrument is valuable and could be damaged.

Of course you can, but also don't feel limited to these! I love it when couples come to me with unusual and personal music requests!

My music is character-full and vibrant, making a statement whether that's for a wedding or a recital. I love to answer questions and let people try out the instrument for themselves.

I've had the honour of performing in the Bridgewater Hall (Manchester), The Wigmore Hall (London) and The Sage, Gateshead.

I love all kinds of music, but my absolute favourite will always be folk. People like Catriona Mckay who are able to tell stories through their music inspired me to learn.

A couple of years ago I was also chosen to perform a solo at the World Harp Congress in Hong Kong - I love to travel, so this was a particular highlight!

Standard Prices
All prices include:You're welcome to pick as many personal music requests within this, no extra cost.
Packages
Drinks reception
Two performances of up to 45 mins each during your drinks reception
£200
Wedding ceremony
This includes music whilst your guests arrive, the bride's entrance, during the signing of the register (and time for photos), and music as guests leave. (Maximum time: 60mins)
£300
Wedding ceremony + Drinks reception
- Music before the service begins, music during the signing of the register, and music as guests leave. - 2 x 45 min performances at the drinks reception.
£500
NEW!Virtual services
Bespoke music video
I'll produce a unique music video with professional recording equipment. I can customise the video with your own branding and a dedication to you or your loved ones!
£60
Get to know the harp
A 40 minute meet-and-greet with the instrument. I'll take you through a brief history, answer questions and play you contrasting pieces of music so that you can experience the full range of sound the harp is capable of.
£40

Thank you for the beautiful music at our wedding last month. Many guests commented on how beautiful it sounded. Both myself and Ann are very grateful.

All our guests loved Becki's beautiful sound. Really one of our favourite parts of the wedding. We cannot thank you enough Becki

I just wanted to say how beautifully you played and we had so much praise for the music at our wedding. We will definitely be recommending you to any friends getting married! Thank you ever so much for adding to the wonder that was our special day! It was so wonderful to walk down the aisle to it! Still on a high now and enjoying all the videos people have taken of your music!!!

Becki was absolutely amazing, the music was stunning and everything we wanted. She was a pleasure to deal with and played songs that we had requested. Couldn’t have been happier! Thank you so much for playing such an important part of making the day as beautiful as it was!

Thank you Becki for playing for us, many of the guests commented on how fab you were. Thank you so much from me and Chris!

Didn't really get a chance to talk yesterday but just wanted to say thank you and your music was great. Everyone enjoyed it. Thanks!

All our guests loved Becki's beautiful sound. Really one of our favourite parts of the wedding. We cannot thank you enough Becki