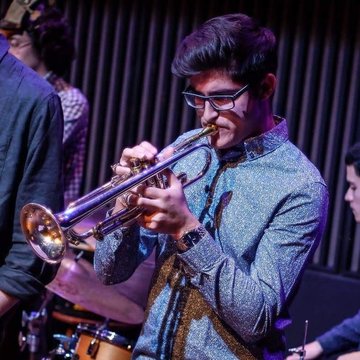 Born and raised in Luton, Ashton started learning the trumpet through his local music service. He played with youth ensembles in the local area whilst growing up, as well as the NYJO Academy Big Band, based in London. Ashton received a scholarship to study an undergraduate degree in Jazz at the Royal Birmingham Conservatoire from 2016-2020, where he received regular trumpet tuition from the likes of Percy Pursglove and Steve Fishwick, and benefitted greatly from the teachings of many more. He has been coached by international artists Tim Berne, Matt Mitchell, Drew Gress, Patrick Cornelius, John Fedchock, Martin Speake, and Ethan Iverson. He has performed with the Royal Birmingham Conservatoire Jazz Orchestra under the direction of British composer Mike Gibbs, who is well-known for his work with Germany’s NDR Big Band, and a wealth of esteemed artists. Ashton has performed at Birmingham Town Hall, Cheltenham Town Hall, Birmingham Symphony Hall, Cheltenham Jazz Festival, Southport Jazz Festival, and more, both as a sideman and bandleader. He performed alongside John Surman, Chris Laurence, and John Marshall in the ‘Brass Project Live’ in 2019. As a composer and performer, Ashton has recently digitally released his debut album ‘Further Afield’ (Live) for jazz octet. As a freelance trumpet player, he performs up and down the country in jazz, funk, soul, pop, dance, NOLA-style brass band, and era-music settings, often for private functions, events, and weddings. He has also played abroad in Europe. Please visit web site for more info. ashtonsmithtrumpet. com

Thank you for being so patient, you played beautifully and we really appreciate it. The Last Post was just what my Dad would've wanted.