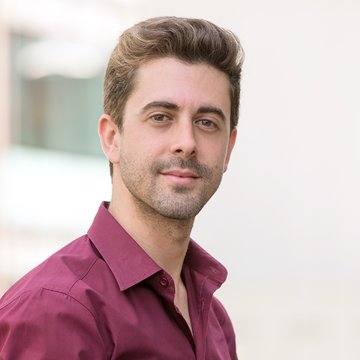 Graduated in Masters in Performance at the GSMD, London. Antonio Oyarzabal combines the solo playing with chamber music and orchestral piano
3 of 4 photos
Pianist
Londres
Public liability insurance of £1 million

Antonio Oyarzabal was born in Bilbao in 1989. He started studying piano with Sor Cecilia Keller and continued with Guadalupe López completing high school with honors and obtaining the highest grade in piano. Later, he entered in Musikene, in San Sebastian. At this school he obtained his bachelor degree under the pianists Marta Zabaleta and Miguel Borges, and trained in contemporary piano repertoire with Ricardo Descalzo. Antonio also completed a harpsichord Diploma degree wit Honors, training with Loreto F. Imaz. He assiduously recieves lessons from pianist Denis Pascal and the Armenian master Anahit Simonian, with whom he works on piano improvisation. Antonio is a Master Graduate as a piano soloist at the Guildhall School of Music and Drama in London, where he is now part of the exclusive programme Artist Diploma, studying with Caroline Palmer. Antonio is a versatile pianist that combines performing as a soloist, as well as chamber music, orchestral piano and piano accompaniment. As an orchestral pianist, Antonio has a lot of experience. He works on orchestral repertoire with LSO Keyboard Principal John Alley. Recently, he has played with Basque Country Symphony Orchestra in a programme including Petrushka by Stravinsky. Antonio has been named Principal Keyboard of the Gustav Mahler Jugendorchester in 2014 and 2015. He has also been the keyboard player for ULSO in London, Guildhall School Symphony Orchestra, and the European Union Youth Orchestra 2014. Antonio is the Principal Keyboard of the YMSO since 2012 and he has played several times with JORCAM of Madrid, Basque Country Youth Orchestra, and with the various symphonic groups of Musikene, etc. Antonio has worked with many conductors, such as Vasily Petrenko, Vladimir Ashkenazy, David Afkham, Jun Märkl, Peter Stark, John Wilson, Leo McFall, James Blair, Juan José Ocón, Pierre Cao etc. With these different orchestras, Antonio has performed in venues such as Royal Albert Hall PROMS 2014, Casino Kursaal in Interlaken, Auditorio Nacional de Madrid, Fundaçao Gulbekian in Lisbon, Philarmonie Gasteig in Munich, Philarmonie Kasel, Grafenegg Auditorium, Barbican Hall in London, CERN in Geneva, and Musikverein in Vienna. As a chamber pianist, Antonio is one of the founder members of Trisquel Arts Ensemble, with which he had been playing in different recitals since 2013, both in the UK and abroad. Together with Trisquel Arts, Antonio has taken part in a pedagogical proyect with the DECODA Ensemble from the USA recently. His experience also includes playing with different Spanish ensembles at the Euskalduna Palace in Bilbao, Fundación Botín in Santander, Kutxa Hall of San Sebastián, Quincena Musical Festival of San Sebastián 2010. As a soloist, he recently played Mozart Piano Concerto nº23 with Aldwych Sinfonia in London. He has also played Ravel Concerto in G and Mozart 9th Piano Concerto with JOL in Spain. Other experiences include Bach Concerto for two harpsichords and orchestra in C minor, and Poulenc Concerto for two pianos and orchestra with Musikene Symphony Orchestra. Antonio has also performed Gershwin Rhapsody in Blue with European Union Youth Orchestra in Grafenegg, Austria. As a singer accompanist, Antonio frequently works with different singers. He often performs with mezzo Chlöe Schaaf, with whom he has performed at the Leeds Lieder Festival, Song in the City Festival in London and in Academia Marshall, Barcelona, among other venues.. With soprano Mirjam Mesak, Antonio has performed at the Westminster Cathedral in London and they have been named finalists of the English Song Competition at the GSMD. Antonio has been the accompanist of the Proms on the roof 2015. He also had the opportunity to accompany Emily Magee and Christiane Karg at the GMJO Spring Tour 2014. Antonio has given a number of solo recitals around London and abroad. He has performed in Paxos International Festival in Greece, Pirineos Classic Festival, Aiara Festival, Song in the City Festival, The Forge Camdem, Southwark Cathedral, St James Paddington, St Stephen Walbrook, St John Baptist Church, St George Bloomsbury, Juventudes Musicales Bilbao, Musitekton Barcelona, Academia Marshall Barcelona, etc. Antonio has been awarded with the Guildhall School Trust from 2012/2014. He has also been awarded with the 4th Prize at the Eastbourne Young Soloist Competition 2013 and the 2nd prize at the “Concours International d’Ile de France” competition in Paris, 2008. He complements his training with masterclasses with pianists such as Émile Naoumoff,, Luis Fernando Pérez, Denis Pascal, Josep Colom, Vladimir Bronewetzky, Bernard d’Ascoli, Paul Roberts, Noriko Ogawa, and Guigla Katsarava among others.

Antonio is one of those rare pianists who internalises what he plays to such an extent that it almost seems as if he's composing it as it unfolds."

"...the image that comes to me instantly when describing Antonio is a rainbow, magic of the air and colours. The soul of a wise child drawing in the sky, and the capacity to create unforgettable instants through his music.