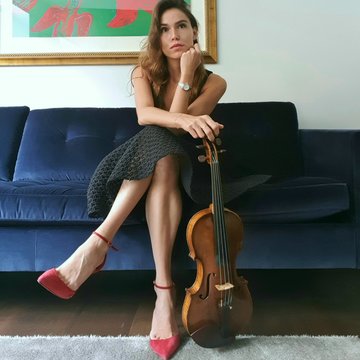 Concert Violinist and teacher Based in High Wycombe, I travel to you for all types of events. I will play any genres required get in touch!

French born, Anne-Sophie Beranger is a concert violinist, violin teacher and Primary  School Music Teacher. Currently based in High Wycombe, she is sharing her time between teaching and performing. After her Bachelor at the « Haute Ecole de Musique » of Geneva, where she studied with Marie-Annick Nicolas, she graduated with a Master of Arts at the Royal Academy of Music of London under the tutelage of Philippe Honore. During her studies, Anne-Sophie has been awarded several bursaries and received support from the Association des Amis de l’Orchestre Philharmonique of Monte-Carlo. She had the privilege to participate in Masterclasses by renowned musicians such as Menahem Pressler, Tedi Papavrami, Renaud Capucon, Maxim Vengerov, Tasmin Little, Laurent Breuninger… She also played in different orchestras under the conducting of Jesus Lopez-Cobos, Michel Corboz, Semyon Bychkov, KazukiYamada, Sir Mark Elder and Jane Glover. Anne-Sophie is an active member of different London based ensembles. In 2010, after finishing her studies in Monaco she did her soloist debut with the Monte-Carlo Philharmonic Orchestra. Recent performances highlights include recitals at Craxton studios, High Wycombe and private recital in Monaco. She currently plays a violin made by Castagneri in 1762.

Standard Prices
All prices include:Skype or phone call consultation, repertoire of your choice.

Anne-Sophie perfectly matched the mood for this birthday party. She played the respertoire I requested. She was on time and perfectly organised. She dressed well and acted in a professional manner

I had the pleasure to play with Anne-Sophie in a concert for violin and piano. She is a professional with sensitive playing and will collaborate with her again.