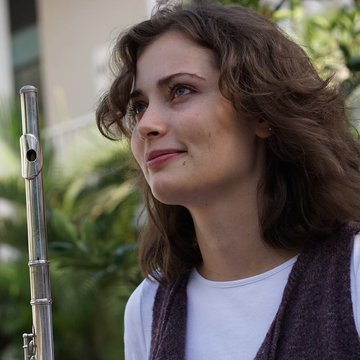 A rising young artist, Anna Kondrashina is a prizewinner at prestigious competitions such as the 3rd Nicolet International Flute Competition (China, 2014) and the 9th Kobe International Flute Competition (Japan, 2017). She performed as soloist with various orchestras such as the Buchmann- Mehta School of Music Orchestra, conducted by Maestro Z. Mehta, and Maestro A. Levin with the Moscow Conservatory Orchestra. An experienced orchestral player, she is frequently invited to play in orchestras including the Israel Philharmonic Orchestra, the Jerusalem Symphony Orchestra, the Jerusalem Baroque Orchestra, and the Israel Symphony Orchestra Rishon LeZion. Anna has also taken part in different projects and music festivals in Russia, Italy, Germany, and Israel, on both modern and baroque flute. She has participated in masterclasses with William Bennett, Lorna McGhee, Emily Beynon, Andras Adorjan, Felix Renggli, Jean Ferrandis, Karl-Heinz Schutz, Hans-Joachim Fuss, Benedek Csalog. Anna was born in Moscow and received her primary education at the Gnessin Special School of Music in Moscow, in the class of Maria Chepurina. She completed her Bachelor’s degree at the Moscow Tchaikovsky Conservatory in the class of Olga Ivusheikova (Department of Historical and Contemporary Performance) on modern and baroque flute. Anna continued her education at the Buchmann-Mehta School of Music in Tel Aviv with Yossi Arnheim, where she was accepted to the Adler-Buchmann program for outstanding foreign students. Anna is currently a Master's student on a full-tuition scholarship at the Royal Academy of Music in London, in the class of William Bennett