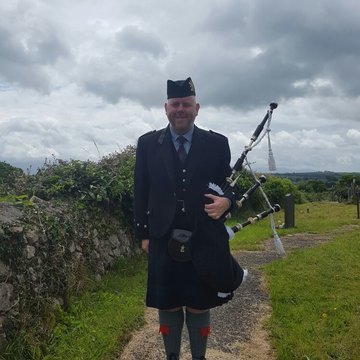 Check availability and get a free quote now - no commitment to book
From£160
Watch & Listen
About Andy
Song list
Reviews
Home page
Andy The Piper
Like Andy?
Watch & Listen
1-3 of 3 videos
Andy the Piper - When the Battle's 'Oer and The Green Hills of Tyrol.
Scots Guards Association Pipes and Drums - (Manchester).
Andy the Piper - Lochanside

I became aware of the sound of the Great Highland Bagpipe at a young age, but due to several reasons I wasn`t able to learn to play until 1980 when I was 16 years old. My original tutor was Pipe Major John Bruce - formerly of The Royal Scots Dragoon Guards - John was part of the "Amazing Grace" phenomenon, and took part in the recording. My other tutors include Major Bruce Hitchings MBE BEM - who taught me when he was a Corporal at the Scottish Division School of Music in Aberdeen. Bruce spent the last eight years of his military career in the post of Pipe Major, at The Army School of Piping, at Edinburgh Castle. From a more personal point of view both my great-grandfather , his brother and my grandfather all played the pipes. My Great grandfather being a piper in the Argyll and Sutherland Highlanders during WW1. The family came from the Strathdon area deep in the Cairngorms. Family legend has it that my great grandfather and his brother were taught to play by "tinkers" - travelling folk who went from village to village looking for work. My great grandfather was friendly with the "Strathspey King" - James Scott-Skinner. whose mother also came from Strathdon. Scott-Skinner`s most famous tune being a lament called "Hector The Hero" named for General Sir Hector MacDonald VC. With these musical family connections I was well versed in Scottish/Highland/Gaelic folk lore and tradition before I had touched a chanter. By 1982, having learned the basics of the instrument, I continued my piping career under Pipe Major Allan Dippie BEM and Pipe Major Joe Rafferty BEM with The Black Watch - probably Scotland`s most famous regiment ? With The Black Watch I played at the 1985 and 1986 Edinburgh Military Tattoo`s as well as playing on numerous foreign tours and occasions both in the UK and Europe. Since 2003 I have been a piper with the Scots Guards Association Pipes and Drums in Manchester. With this band I have played in many competitions and concerts. In 2008 the band celebrated its 50th year anniversary, and recorded a CD. A video clip on my profile is from that recording session. Amongst it`s many engagements the band has played at both the Edinburgh Military Tattoo and the Basel Tattoo in Switzerland on two separate occasions, as well as at The Royal Albert Hall and Balmoral Castle for HM The Queen. I am happy to play both as a soloist and a band member, and can if required put a band together for a client. As you can see I have many years of experience and come from a family rich in highland culture - something which I am very proud of and hope is conveyed by my music.

I was so pleased that I had booked Andy to play at my dad’s surprise 70th birthday gathering. My dad was completely taken aback as was the rest of my family. Andy played beautifully and especially Amazing Grace which is my dad’s favourite. Andy really made my dad’s birthday extra special something we will talk about for years to come. All of my family enjoyed every moment listening to Andy and he even played an extra song request for another family member. Andy was very personable, professional & smartly dressed in his kilt attire. His experience of playing the pipes is first class and I would definitely recommend Andy to anyone looking to book a piper.

Andy recently played at a Burn's Night I had organised and he provided a great standard of piping which really added to the atmosphere of the evening. Andy is very enthusiastic about his piping and offers a great value for money service so I am glad he was available to play for the night! 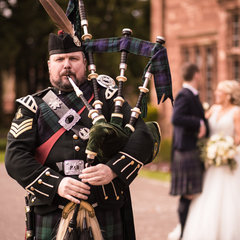 Andy is a top class bagpiper, you would be assured of a professional service when booking Andy.