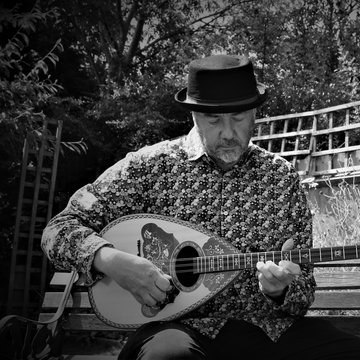 Andy is a gifted musician who works world wide performing on Bouzouki and Guitar.
3 of 6 photos
Bouzouki
Sutton Coldfield

Andy is a multi instrumentalist, arranger and composer with a highly respected international reputation. He is a member of Bonfire Radicals, one of 7 guitarists in Daevid Allen's Glissando Guitar Orchestra. He has over the past several years played in some of the finest Acoustic bands, most notably the legendary Bushbury Mountain Daredevils and The Late Night Band who for many years were regarded as two of the finest acts in the U.K. Andy has performed at concerts in Europe and America with members of Fairport Convention, Jay Sean, Gong, Damo Suzuki, Blowzabella, Daevid Allen, The Electric Light Orchestra, Acid Mothers Temple, Dave Stewart and has studied the Hansa Veena with renowned Indian classical musician Barun Kumar Pal. As a well-respected solo artist Shankara has produced seven solo albums, which have met with much critical acclaim. In fact his album Ramshackle Pier was voted instrumental album of the year by top acoustic magazine Froots. His masterly playing of the Bouzouki and Weissenborn acoustic slide guitar is in regular demand for use on many television and film soundtrack work.

No problem I can always work around your timings.

Yes I can provide background music to suit.

I bring everything I need.

Yes I can learn up to 3 pieces but please give me advanced warning of at least 3 weeks.

I performed with Jay Sean at NIA Birmingham

Now extended to a quintet, the former duo Fret and Fiddle played a wide range of classic and modern jazz, with the occasional foray into other genres of music when they appeared at Lichfield Blues and Jazz Festival. Led by the charismatic violinist and vocalist Sally Minchin, and guitarist Andy Bole the band received exemplary support from keyboard player Rich Hughes, double bass player Simon Smith and drummer Steve Street. The music ranged from serene ballads to rambunctious displays of musical invention from guitar, keyboards and violins. The set started with Duke Ellington’s well-known Jazz standard, Caravan, whilst the French Waltz of Indifference was a display of gentle, filigree music making. All Bowley’s Close your Eyes was delivered as a slow burning torch song, the famed Django Reinhardt/Stephane Grapelli Minor Swing was delivered at a faster pace, but Autumn Leaves delivered a sense of melancholia. Nat King Cole’s Nature Boy closed the first half, with its adventurous arrangement adding depth to the delivery. The second half featured music that went well outside of the Jazz idiom, with Tom Wait’s Chocolate Jesus, the traditional piece Misserlou and The Penguin Café Orchestra’s Music for a Found Harmonium being particular highlights.

Each time I’ve seen him I’ve marvelled at his dronish, looped soundscapes based around guitar and bouzouki, as things of rare beauty.

I found myself being modestly manipulated in such a way as to find a beguiling sense of peace and spirit that might have otherwise found itself more at home in what was once called euphemistically the mystic east.