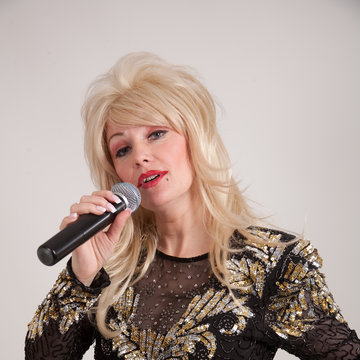 The Dolly Parton Story - brought to you by Andrea Pattison and The Partoners Dolly Parton is a unique performer and one of the greatest songwriters of her generation. After four decades in the business she maintains her position as an iconic vocalist, composer, actress and business inspiration. Her recent critically acclaimed back to roots Bluegrass albums have shown that her music is still finding new audiences all over the world. Andrea has performed as Dolly successfully all over the UK, recent highlights have included sell out performances at Glasgow Pavilion and The Brunton Theatre, Musselburgh (Edinburgh fringe), as well as very well received sets at "The Marvellous Festival", Reading and "The Tartan Heart Festival", Inverness. Andrea also plays “Dolly” in the new show “Islands in the Stream”, which features Peter White as Kenny Rogers. She's also recently started doing more solo appearances, at functions, corporates, casinos, bingo halls and other smaller venues. Although Andrea is based in the North East, she's prepared to perform anywhere. When clients ask about Andrea appearing as Dolly at smaller private events, it is usually her solo show they book. It's not normally necessary for her to appear with her full band at smaller venues or private events, as she would on theatre performances. It's not as logistically challenging , as well as being much less expensive. When Andrea performs solo she usually does two 40 minute sets, with a full costume change during the break. She sings all of Dolly's most well known songs, as well as many country standards and pop classics that Dolly's covered over the years. She performs completely in character, so the narrative, interactive and humorous elements of her theatre show are maintained when she's on stage solo. Andrea’s act is completely self-contained, she uses high quality PA and digital play back equipment, as well as multi-coloured stage lights. Andrea’s backing tracks were mostly recorded by her band, so a high musical standard is maintained.

Standard Prices
All prices include:When Andrea performs solo she usually does two 40 minute sets, with a full costume change during the break. She sings all of Dolly's most well known songs, as well as many country standards and pop classics that Dolly's covered over the years. She performs completely in character, so the narrative, interactive and humorous aspects of her theatre show are maintained when she's on stage solo Andrea’s act is completely self contained, she uses high quality PA and multi coloured stage lights. Andrea has played Dolly Parton in the touring theatre show “The Dolly Parton Story” since 2009, and in the Dolly/Kenny show “Islands in the Stream” since 2015. Andrea has performed at major venues and festivals all over the UK, including Newcastle City Hall, Sunderland Empire, Billingham Forum and Whitley Bay Playhouse.

Thank you for a fabulous show last night. I really enjoyed every aspect of it. It could not have been better. Take care and I look forward to seeing you and your fabulous band again."

One of the best live shows we have had recently at the Pavilion Theatre Glasgow, to call this a tribute show would be an injustice, it is much more than that, shut your eyes and it was Dolly! The four piece band sounded more like eight. And nice people to work with.....See you back next year."

Andrea, you were truly amazing, your voice and costumes were beautiful, we all loved you. We have seen Dolly live and you are on par with her. Thank you so much."

Such a talent, and such an amazing performance. Dolly is as infectious as are you Andrea! Thank you for giving your everything."

Singers in the UK
Singers in Newcastle upon Tyne
Singers in Tyne and Wear
Singers in Sunderland
Singers in Durham
Singers in County Durham
Customer Service
Discover
Company
As seen on
© Encore Technologies, Ltd.
Crafted with bagels and in London