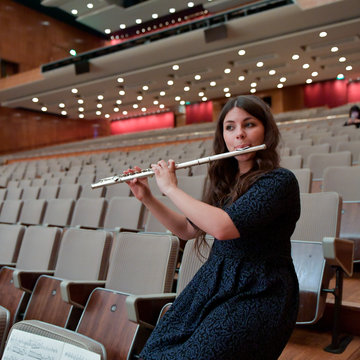 Freelance flautist based in London.

Amy-Jayne Milton ‘is one of the top players of her generation’ - Sir James Galway Amy-Jayne started the flute at the age of eight, shortly after, at the age of eleven she achieved a place at Chetham’s School of Music. At the age of thirteen, Amy-Jayne had the amazing opportunity to play to Sir James Galway through the National Children’s Orchestra. Sir James felt that ‘Amy-Jayne’s rare talent should be nurtured’ who sponsored and invited her to his International Flute Festival in Switzerland for two consecutive years. She is now mentored by Sir James and Lady Jeanne Galway. In 2017, she attended the Galway Flute Festival receiving full sponsorship from the Gemeinhardt Flute co. and was awarded a R.F Lafin headjoint. Shortly before the festival, Amy-Jayne graduated from the Royal College of Music with Honours, supported by a Kirby Laing Award and Neville Wathen Award. Since her graduation, Amy-Jayne has been embracing her career worldwide as a professional freelance flautist and enjoys participating in a variety of different musical roles from orchestral to solo. Amy-Jayne’s professional orchestral achievements include freelancing with the London Symphony Orchestra, BBC Philharmonic and the Royal Northern Sinfonia. Her highlight is playing Principal Second Flute with the London Symphony on tour with Sir Simon Rattle in Japan, Korea, Vietnam, as part of the Santander Festival, Salzburg Festival, Lucerne Festival and Edinburgh International Festival. Her other orchestral achievements include playing Principal Flute as part of the London International Choral Festival, working side by side with the Royal Philharmonic Orchestra, the Britten-Pears Orchestra, under the baton of Oliver Knussen, playing Principal Flute with the Young Musicians Symphony Orchestra and working intensively along LSO Principals at the London Symphony Orchestra Woodwind Academy. In her third year at the Royal College of Music, she was Principal Flute in the Symphony Orchestra where they performed an all-Stravinsky programme at the Royal Festival Hall. Amy-Jayne's solo highlights include performing recitals at the Ryedale and Shaldon Music Festivals, Bishopsgate Institute, Austrian Cultural Forum, the Mansion House for the Worshipful Company of Musicians and performing Carl Nielsen's Flute Concerto with the Harrogate Philharmonic Orchestra. Over the years she has won numerous competitions including the Rotary Young Musician International competition in Great Britain and Ireland. Another interest of Amy-Jayne is contemporary music and she regularly records composers works. She has premiered at the RNCM Music Festival, National Portrait Gallery and as part of film scores. As a busy freelancer, she is a passionate and successful teacher of flute, piano and recorder. She is a visiting professor at the flute department at Connelly School, DC and has performed masterclasses in New York. Amy-Jayne believes that education in music is vital to inspire the younger generation.