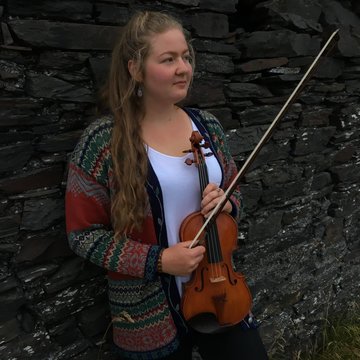 Check availability and get a free quote now - no commitment to book
Watch & Listen
About Amy
Home page
Amy Birse
Like Amy?
Watch & Listen
1-2 of 2 videos

Violinist
London
Amy Birse is a classical violinist, pianist and Scottish folk music artist from Aberdeen, currently based in London.

Amy Birse is currently studying at the Royal College of Music in London where she studies both violin and piano. As well as ensemble, chamber, and orchestral commitments, Amy loves to perform her own recitals in various venues, play at weddings, rotary events and festivals. After achieving her grade 8 violin and grade 8 piano with distinction at the age of 15, she went on to win the overall Instrumental Challenge Cup in the N.E of Scotland Music Festival, and was winner of the first Grampian Youth Orchestra Concerto Competition, playing Mendelssohn's Violin Concerto with the orchestra in 2017. She has also performed with the Scottish Ensemble on their Concerts by Candlelight Tour, the Hebrides Ensemble and NYOS Camerata. Amy has played with the National Youth Orchestra of Scotland for many years and with them she has enjoyed touring China, playing at various events including the BBC Proms, European Championships, the Edinburgh Festival and many more. In the 2018 season she was thrilled to have been selected as leader of the orchestra. As well as being deeply involved in the classical music scene, Amy is passionate about Traditional Scottish Folk music and loves to arrange, perform and record arrangements of traditional folk songs and fiddle tunes along with her younger sister, Rachel. Together they bring to life the culture and beauty of Scotland and share new ideas within the traditional tunes.