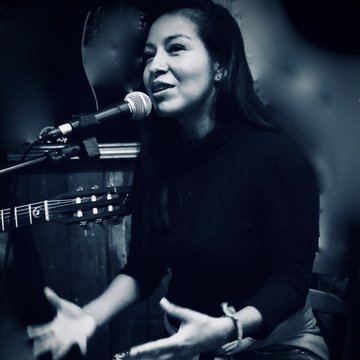 Drawing together influences from Catalunya, Chile, Peru, the Caribbean and London, Amarea has forged a unique passionate and rhythmic style.

Drawing together influences from Catalonia, Chile, Peru, the Caribbean and London, Amarea has woven together a unique style which they apply to ballads and songs from the Romance tradition. The result is sensuous, seductive and rhythmic. The repertoire includes songs from the Mediterranean, Brazil, Cuba, Peru and Argentina as well as original material in Spanish and English. The MUSICIANS Yuri Betancourt Garcia; Guitarist . Learning his music in Chile, Yuri spent 15 years in Europe expanding his musical experiences. He has played with many bands on the London Latin scene including Lokandes, Los Chinches, Dandaluz, Quimantu, Xam Xam and Mauricio Venegas. Michael Baldwin, Saxophonist and Composer. Playing on the London Jazz scene since the eighties, he ran several of his own bands and worked with Russ Henderson MBE, Gary Crosby, MBE, Denise Baptiste, John Smith, Mark Taylor and Dick Pearce. He spent over a year in Jamaica, playing reggae with the Stardust band, led by George Tucker, Skatalite Guitarist. He recorded at Tuff Gong and other Kingston studios and played with Lee van Kleef. In the USA, Mike worked with a number of groups in Portland and Los Angeles and even had the good fortune to play with a young Esperanza Spalding. Over the last few years, Mike has been playing with ‘Jardares Por Fuera’, Lokandes, Gypsy Butter and Dandaluz, London’s leading Latin and Flamenco Rumba bands. Daida Carbonell is a Singer and Composer from Barcelona, where she trained in dance, theatre and music. Aged 19, she came to London to follow a career in music, achieving a Degree in Popular Music at the London College of Music (UWL). Subsequently, she sang with ‘West London Jazz Quartet’, ‘Jusvibes’ and ‘Karisma’. With Amarea, she has been rediscovering the Latin music of her roots. Kieffer Santander is one of London's finest percussionists and has played with many of the Latin and Jazz groups on the Scene. Growing up in Peru, Kieffer learnt Afro Peruvian rhythms from the streets and at the same time, attended music college studying all aspects of Latin percussion.He also plays with Lokandes and Los Chinches.

Genevieve Christie, Flipside Festival: Thank YOU for coming and playing at FlipSide. Amarea were wonderful, and I received a great deal of positive feedback, with everyone saying how much they enjoyed it.