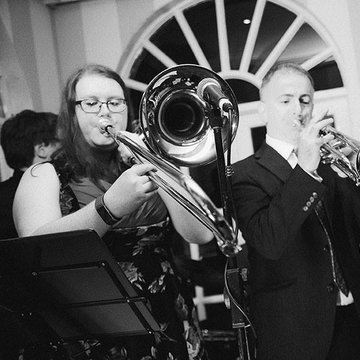 Trombonist in Edinburgh interested in a variety of performance opportunities.
3 of 7 photos
Trombonist
Edinburgh
Public liability insurance of £10 million

Originally from Glasgow, Alex moved through to Edinburgh in 2008 to study music at Edinburgh Napier University. Since then she has been a member of orchestras, a British Legion marching band, swing bands and funk and soul function bands; as well as a freelance player for pit orchestras. Currently a member of The Red Hot Rhythm Makers: a New Orleans trad jazz band, and loving exploring jazz and improvisation.

There is a palpable buzz as the “gals” get ready. There’s no luxury of a dressing room, or backstage. This is the Edinburgh Jazz Bar, the temple of Jazz, and what a place to see Scotland’s six-piece all girl jazz band, the Red Hot Rhythm Makers. Heads turn as a few bars of Duelling Banjos ring out for the soundcheck, and then, after a brief introduction, it’s straight into Royal Garden Blues. Led by Ali Affleck (vocal, washboard, cymbal, woodblock), the show is based loosely on the band’s project, Six Gals Named Smith, all of whom were singing or performing songs through the early years of the 20th century, and Bessie Smith, Trixie Smith, Ruby Smith, Clara Smith, Laura Smith and Mamie Smith, are the inspiration and the source of much of the content, along with some Ma Rainey and Memphis Minne... See the rest of the review at http://www.brasstrapped.com/2019/08/10/the-red-hot-rhythm-makers-percolatin-brilliant/

The Red Hot Rhythm Makers have recently been making a fantastic name for themselves on the Edinburgh live music scene. So when looking for a band that was guaranteed to have the Steampunks jumping at the recent Miss Shelley’s Secret Shenanigans event in Edinburgh, The RHRMs seemed the perfect choice. However, even I was a little surprised and yet thrilled at just how warm the reception the band received from the delighted and utterly enthusiastic new audience. It was truly fantastic to watch folk walk in and yet be dancing by the time they reached the stage. The Red Hot Rhythm Makers superb take on classics from the legendary golden age of Swing is something really special and gives the impression the band has been together for a lifetime rather than just around about a single year. From a promoter’s point of view, the band’s sound is ideal for anything from summer open air gatherings to late night prohibition era style Speakeasies (and all points in between). In addition to being a fantastic live act suitable for almost any event, festival or gathering, The Red Hot Rhythm Makers are also a promoter’s dream regarding equipment needs, set up and sound check. Despite the size of the band, I have rarely witnessed a simpler and more professional set up and de-rig. The band know exactly what they need and just how to get there with no fuss or drama whatsoever. Book as soon as possible ~ Point the way to the stage, leave them to it and sit back and enjoy is my best advice!

I can easily say that The Red Hot Rhythm Makers are one of my favourite bands in Edinburgh at the moment. I work as a Music Curator for an events company called the Pitt and over the last 6 months I've booked them numerous times not only because I love their music but they also are able to play to any sort of crowd in almost any setting. Anything from a chilled and relaxed vibe to upbeat certified bangers to get people dancing, they get the atmosphere just right. The first time I booked them was for a large outdoor food Market during the Edinburgh fringe and within minutes they had captivated the entire audience of around 500 people. Since then I have used them for several events the last being Hogmanay at The Biscuit Factory which they absolutely smashed and had the whole place moving. To top it all off they are all lovely people and very easy to work with. They are number one on my bookings list.