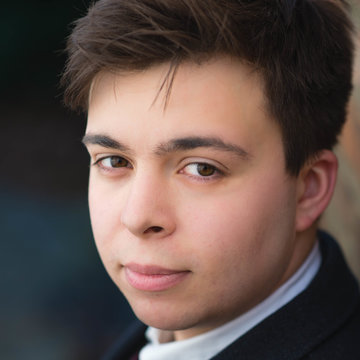 Check availability and get a free quote now - no commitment to book
From£160
About Alex
Reviews
Home page
Alex J. Hall
Like Alex?
Watch & Listen

Alex J. Hall (b.1995) is an English/Canadian composer, arranger and musician currently based in London, UK. Alex is currently studying composition at Guildhall School of Music and Drama with Paul Whitmarsh, having also received tuition from James Weeks and Julian Anderson. Much of Alex’s work revolves around either mathematical processes, poetic surrealism and contemporary theatre, with an emphasis on finding material to suit the purpose and instrumentation. Alex is also a Baritone studying with former Gold Medal winner and BBC singer Ian Kennedy, having also partaken in education and workshops with Mary Hammond, Loré Lixenberg and Claire Moore Alex has worked with groups and players from ensembles such as London Contemporary Orchestra, EXAUDI, City Chamber Choir (as Composer-in-Association), Barbican Sinfonia, and soloists such as Jonathan Powell and Aino Konkka. Alex has a particular interest in writing for Theatre, having worked as composer on a number of recent projects. In March 2015, Alex was composer and director for the multimedia instillation project “Khaos" which was generously supported by Barbican Creative Learning. This was followed by composition credits at the Barbican for the Wedekind play “Lulu" (dir. Christian Burgess) in November 2015 and "Go, Make You Ready” (dir. Patsy Rotenburg OBE & Sue Lefton) which toured to China and featured as part of the BBC’s Shakespeare 400 event in March 2016. Alex also works as a multi-instrumentalist in London for a variety of clients and events. He is currently accompanist and arranger for the London Humanist Choir, which has lead to performances with or alongside Sara Pascoe, Stewart Lee, Phillip Pullman, Richard Dawkins and Tim Minchin. As a singer, Alex has worked in both Classical and Musical Theatre settings, working on productions such as Kagel’s “Staatstheatre” in Milton Court, and also productions such as Songs for A New World (Silk Street Theatre 2014) and Sweeney Todd (also as assistant MD, Frogmore Paper Mill 2016), as well as lead singer for GSMD pops orchestra. As a Bassist and Guitarist, Alex has also played in and around London in a variety of pit bands, live acts and studio sessions. From June 2015, Alex became the Head of both the New Music Society and Musical Theatre Society at GSMD.

Paired with great music, the show has some truly captivating moments. It sends a clear message about sex and the worship of the body, but still leaves room for themes such as love, money and discrimination. With a strong cast and talented musicians, Lulu is able to be funny and unsettling at the same time

I really enjoyed your piano pieces, particularly the one where you sing into the piano. I like the idea also that you are working on an ongoing series of piano pieces

Julian A, 7 years ago

this was a very fine concert with a great sequence of pieces. Congratulations to all composers and many thanks to those who organised it all so well