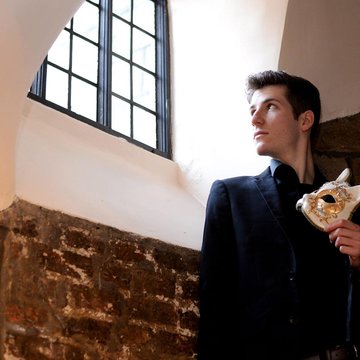 Check availability and get a free quote now - no commitment to book
From£180
About Alex
Questions (1)
Add-ons
Reviews
Home page
Alex Akhurst
Like Alex?
Watch & Listen

Having begun studies as a singer while studying at Durham University, Alex has worked with several opera companies including Rocket Opera and Opera dei Lumi, as well as performing lead roles for Durham Opera Ensemble and holding choral scholarships in several collegiate choirs. Alex has also been a deputy at Durham Cathedral and St George's Cathedral, Southwark. Since arriving in London, Alex has performed roles including Don Ramiro (Rossini, La Cenerentola), and Don Ottavio (Mozart, Don Giovanni). Alex has also performed in a London tour of HMS Pinafore ​(Durham Opera Ensemble), and Alfred ​in an English language version of Strauss's Die Fledermaus ​(Durham Opera Ensemble). He has also appeared as a young artist with Berwick Festival Opera and the Yorke Trust Opera (Norfolk). Having previously trained as a pianist, Alex began regular voice lessons relatively recently (at 18 years, in his first year of his undergraduate studies). Now 21, he is enjoying many performance opportunities and also a steady stream of challenging professional work. ​In 2020, he will be entering his second year studying for a master of music (vocal studies) with the support of the Kathleen Creed scholarship at Trinity Laban Conservatoire of Music and Dance.

'Alex Akhurst’s truly beautiful voice soars with ease, garnering sympathy for his portrayal of Ralph Rackstraw right from the off with his flawless performance of The Nightingale.'

Alex Akhurst delivered the recitatives well and with confidence

'A wholesome and earnest beauty to his voice that only add(s) to his characterisation.'