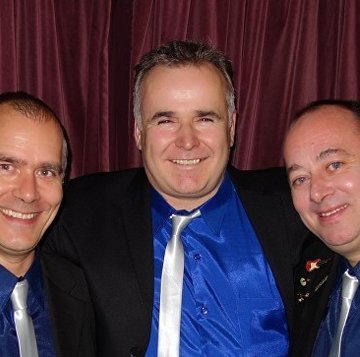 Switched on are a fully professional trio, specialising in 50`s and 60`s Rock and Roll. Featuring one of Kents finest guitarists (Alan Harry), with over 30 years in the music business. These guys have worked for some of the largest corporations in the entertainment industry, Bourne leasure, British holidays, Haven warner, Butlins, Brittany ferries, P&O, and Stena line, supporting such acts as Showaddywaddy, The Swinging blue jeans, The Searchers, Jerry and the Pacemakers, Wayne fontana, Tommy Bruce, The Ivy Legue, Marmalade, and many more. Better known for being members of top cabaret group "Apache showband ", the boys are also now available for solo work, duo work, and as trio "Switched on". A night of pure nostalgia and satisfaction is guaranteed.

Thank you for a fantastic evening.

The shadows stuff was spot on.

Apache was incredible. The closest i have heard.