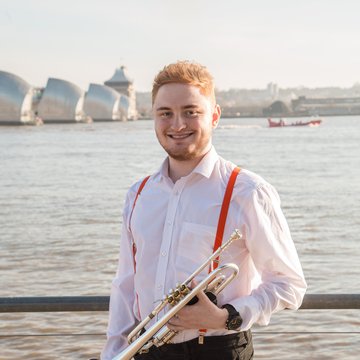 Adam is currently studying for a BMus (Hons) degree (trumpet performance) at Trinity Laban Conservatoire of Music and Dance in London. Tutored by Bob Farley, Andrew Dunn, Andy Hendrie and Ryan Quigley, he appears in big band, oompah, brass band, pop, orchestral concerts and musical theatre productions covering London and the East Midlands. Adam has performed as a soloist at prestigious venues including the Royal Albert Hall, Birmingham Symphony Hall, Sheldonian Theatre and The Sage Gateshead - as well as numerous famous European tour venues. He currently occupies the Soprano cornet seat with the Royal Greenwich Brass Band, played Repiano Cornet with the Redbridge Band & Virtuosi GUS band and Trumpet in function band-Totally Funktional and Big Smoke Brass. Having gained a music scholarship to Oakham School he studied trumpet with Steve Foster and was awarded a number of academic prizes by the music department. Aside from performing, Adam enjoys composing and arranging music and has had successes with these at concert and competition level. Occupying the Principal Cornet seat of Youth Brass 2000 (under the musical direction of Lord Chris Jeans), Adam saw the band attain a historic ‘grand slam’ of winning all 4 major UK youth band titles in 2016. At an early age Adam was a member of the National Children’s Brass Band of GB and became Principal cornet of Foresters Brass 2000.

Big Smoke Brass played at one of our Freshers’ events in September, and they were absolutely wonderful. The music was phenomenal, but equally their professionalism and efficiency were spot on. They made managing a very stressful event, considerably more enjoyable. I’ve already booked them for our Oktoberfest, and will be looking for other opportunities to employ them again. These boys are incredibly talented and deserve to go far. On behalf of Trinity Laban Students’ Union, thank you so so much for your brilliant performance!

Verified
Will M, 1 year ago

The Big Smoke Brass guys certainly know how to put on a show! Familiar and well-loved pop songs played in a way you definitely won’t have heard before. Thoroughly entertaining and never lacking in energy, enthusiasm and swagger. They clearly love playing their instruments and it shows. Dispense with the boring DJ or the covers band you’re thinking of and get them instead.

Thank you Big Smoke Brass for making our wedding so special. We wanted to find a band who did something a bit different, and who could play to a wedding crowd without being too ‘cheesy’. I’m so glad they were able to make our wedding in Wales; they were incredible. From the start, they were flexible about what songs we wanted them to play and were quick to respond - all while being amazing musicians who I’d love to see play all over again. They really judged the mood of the evening and both of their sets were brilliant. Everyone left the evening wanting to know who the band were, how we found them...or wanted to pick up a tuba and start learning. Thank you, thank you!

The Royal Greenwich Brass Band gave its last concert of the season at Charlton House by opening with a refined reading of the march 'Under Two Flags' - helped by the commanding soprano playing of Adam Hebditch.

Soprano cornet Adam Hebditch was the accomplished soloist in Steven Bulla's contemporary take on 'O Holy Night' whilst 'Troika' saw more audience participation, jingling keys with the sleigh bells and whistling along with the main tune.